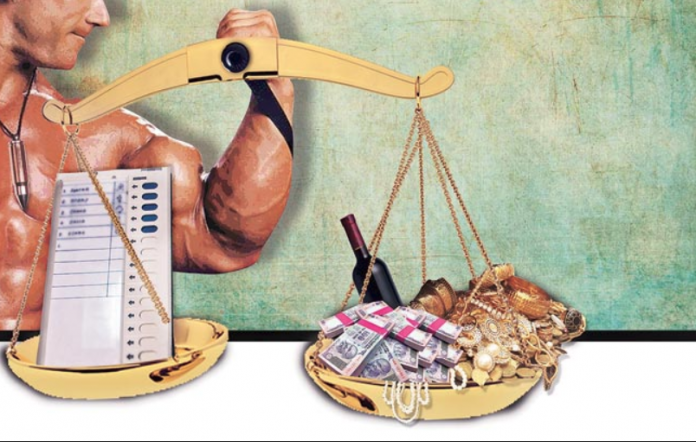 The democracy of India has shown a refreshing ability to adapt to situation and uphold democratic institutions and practices. The Criminalization of Politics needs special attention by the people because the subject revolves around the vested interests of politicians of all the parts of the society; as such the people can never hope that the politicians would take any initiative to rectify this evil because of their own goods. The prevailing trend is spreading like cancer. It is damaging all the constitutional safeguards of democracy; that is, it is spoiling bureaucracy by making it partial; it controls press; and even threatens judiciary; and thus is destroying the very foundation of democracy.

Unlike in Europe, where religious authority, especially the Roman Catholic Church, has a long history of intervening in the secular domain, India has no such comparable tradition. Religion has never sought to dictate politics in India because there has been no consensual centralized religious authority which could claim to speak on behalf of the entire Hindu or Muslim population. Modern India is witnessing the very opposite of the battles fought in Europe to free politics from encroachments by religion. Thus India is in an alarming situation which at the earliest needs to be curbed.

According to the written law or reports firstly talking about the Constitution of India, many privileges and powers are being given to the members of the parliament for the safeguard of their positions and there are also certain conditions which the candidate should follow. But due the increase in Criminalization in the politics of the country the Constitutional Articles are loosing their importance. Not only in The Constitution but in The Representations of peoples Act the rules are provided. Basically the act came in force to provide the necessary guidelines for the electoral process in India. It suggests every procedure involved in the electoral process which includes from the conduct of polls, the machinery involved for free and fair elections, to disqualification of members on certain grounds. But no rule is followed in 21st century’s politics of India.

2.1. CASES TO ILLUSTRATE THE NEED

3.1. REASONS FOR THIS CRIMINALIZATION

A politician’s link with them constituency provides a congenial climate to political crime. Those who do not know why they ought to vote comprise the majority of voters of this country. Therefore majority of the voters are maneuverable, purchasable. Most of them are individually timid and collectively coward they are suppressed by the politicians easily. Elections are won and lost on swings of just 1% of the vote, so parties cynically woo every possible vote bank, including those headed by accused robbers and murderers. Legal delays ensure that the accused will die of old age before being convicted, so parties virtuously insist that these chaps must be regarded as innocent till proved guilty.

This practice is very common in the Indian politics as in every election all parties without exception put up candidates with a criminal background. The greatest power that democracy arms are the people to vote incompetent people out of power. Independence has taken place through a two-stage process. The first stage was the corrupting of the institutions and the second stage was the institutionalization of corruption. As we look at the corruption scene today, we find that we have reached this stage because the corrupting of the institutions in turn has finally led to the institutionalization of corruption. The failure to deal with corruption has bred contempt for the law. When there is contempt for the law and this is combined with the criminalization of politics, corruption flourishes. India is ranked 66 out of 85 in the Corruption Perception Index 1998 by the German non-government organization Transparency International based in Berlin.

3.3. LOOP HOLES IN THE FUNCTIONING OF ELECTION COMMISSION

The Election Commission must take adequate measures to break the nexus between the criminals and the politicians. The forms prescribed by the Election Commission for candidates disclosing their convictions, cases pending in courts and so on in their nomination papers is a step in the right direction if it applied properly. They would only inform people of the candidate’s history and qualifications, but not prohibit them from casting their votes. For the past several general elections there has existed a gulf between the Election Commission and the voter which needs to be reduced but here is no scope of that in near future. Common people hardly come to know the rules made by the commission. Bridging this gap is essential not only for rooting out undesirable elements from politics but also for the survival of our democratic polity. This is an incremental process, the rate of success of which    h is directly proportional to the increase in literacy rate in India. The electorate has made certain wrong choices in the past, but in the future national interest should guide them in making intelligent choices to have a better future of the country.

3.4. DENIAL OF JUSTICE AND RULE OF LAW

Criminalization is a fact of Indian electoral politics today. The voters, political parties and the law and order machinery of the state are all equally responsible for this. There is very little faith in India in the efficacy of the democratic process in actually delivering good governance. This extends to accepting criminalization of politics as a fact of life. Toothless laws against convicted criminals standing for elections further encourage this process. Under current law, only people who have been convicted at least on two counts be debarred from becoming candidates. This leaves the field open for charge sheeted criminals, many of whom are habitual offenders or history-sheeters. It is mystifying indeed why a person should be convicted on two counts to be disqualified from fighting elections. The real problem lies in the definitions.

Thus there should be a stop to one of the biggest loopholes of the Indian Politics that is Criminalization, because if it progresses like the way it is doing now then the democracy of the country will be at stake. The government of India should make and imply such commission through which this practice should come to a complete end. Though it would take time but initial stage of the reformation should be started.