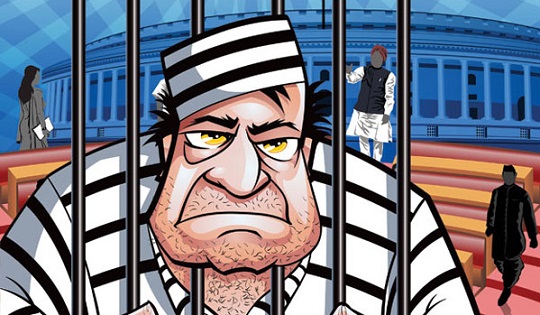 “Criminalization of Politics” refers to those acts carried out by persons with Legislative, Judicial or Executive Authority, (as opposed to the belief that it is limited to political authority) which undermine the constitutional fundamentals of India. In India, these fundamentals are governed by the basic spirit of governance, which is Democracy. The modern definition of Criminalization in politics tends to incorporate more than just the criminalization in “Politics” (in the purer sense of the term) and extends the scope of the term to forms of criminalization in Electoral Politics, Policy-making Politics, Judiciary, Executive and even the Administration. This is so because the modern day definition of Politics imbibes in itself the concept of “Governance” which is holistic.  Today, Criminalization of Politics seeps through the various strata of Indian governance, right from the lowest-rung Babu charging a petty bribe to get a job done, to the top-rung IAS Officer or MP/MLA indulging in some form of perverted activity undermining the ideal scenario of governance. Below is a break-down of Criminalization and Politics.

Ideally, one would opt to define “Criminalization” before defining “Politics”, but in the context of this subject-study, it is more important to define “Politics” since the scope of “Politics” plays a crucial role in setting the parameters of “Criminalization”. According to the Merriam-Webster dictionary, “Politics” is defined as “the art or science concerned with guiding or influencing governmental policy”. Hence, it only makes logical sense to broaden the scope of Criminalization of politics to the extent that all the facets of governance can be covered. As an illustration, when a person with a pending criminal charge gets a ticket to contest the elections, it is a form of Criminalization of Politics. When the Telecom Minister misappropriates a certain amount of money (however significant) to his benefit, or in amore legally specific context, Article 102 (1) (A) of the Indian Constitution bars an MP or an MLA from holding any office of profit under the Government of India or in any state other than an office declared by the Parliament by law as not disqualifying its holder, and when this is negated, it can be called Criminalization Of Politics.

While exploring the subject of “Criminalization in Politics”, be it with regard to any country, what must be kept in mind is that in quintessence, the term “criminalization” is that it is a perverted form of a process and encompasses but is not limited to the term “crime”. The conventional definition of the term includes the persons involved are the high-ranking government officials.

This section is an attempt at bringing forth the existing facets and forms in which the criminalization of politics exists in the Indian Governance. This will be substantiated with examples and illustrations. However, these forms are not exhaustive since an exhaustive approach cannot be adopted for the findings of such a broad phenomenon.

One can attribute the causes of Criminalization in Politics to the fact that India is still a country where the mechanisms which are quintessential to running the various administrative systems are not free of loopholes which feed to the need of men wanting to derive the “extra edge”, or, to overcome the weaknesses which have been attributed to them by the system itself.

While solutions to reduction of Criminalization in Politics have been provided in detail in the subsequent part, it is important to introduce the concept of Electoral Reforms and how they can benefit the dire situation of Indian Politics.  Electoral reforms such as a fixed amount of finances and greater financial transparency by the Electoral candidates which have been implemented to an extent (but are still ridden with loopholes), reduction of Poll Booth Manipulation, etc. instead of getting various committees to sit on issues for ages, is what is required in the crux of the matter.