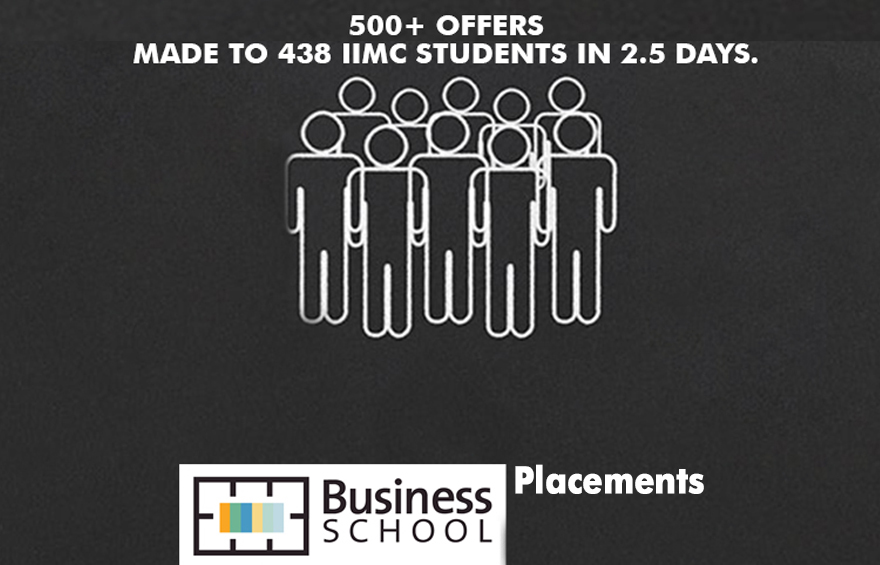 Placements in Indian B-Schools are done in two stages – Lateral and Final Placement. While the lateral placement offers are made to students with prior work experience, the final placement is for the freshers. Â IIM Calcutta has dug deep in the 2015 placements, with over 500 jobs being offered to 438 participants. Various top notch companies made 143 lateral offers, 134 pre-placement offers and 224 final offers to the 2015 batch students in the fields of Finance, Consulting, Sales & Marketing and E-Commerce. Some notable companies that participated in the campus placement process are Goldman Sachs, BNP Paribas, Boston Consulting Group, Accenture, Kelloggs, ITC, Coca Cola, PepsiCo, Reliance Industries Ltd, Amazon and Flipkart among others.

2015 Placements for other IIMs have also been very well. IIM Ahmedabad, which schedules 4 clusters for placements, saw the entire batch of 375 being placed within the 3rd cluster itself. Thanks to the â€œdream applicationâ€ initiative, students were allowed to choose the sectors and functions for their final placement. The 155 companies that participated in the process hailed from diverse sectors such as Analytics, Banking & Financial Services, Management Consulting, Consumer Services, Internet & E-Commerce, Pharmaceuticals and Technology. Aditya Birla Group, Alvarez & Marsal, Amazon, Flipkart, Google, Microsoft and Star TV India were the top recruiters. IIM Bangaloreâ€™s 398 students were offered more than 450 jobs across 200+ profiles.

XLRI Jamshedpur achieved 100% placements in 3.5 days, which was the largest batch to ever sit for final placements in XLRI history. XLRI final placements had 108 recruiters from fields like BFSI, FMCGs, General Management, Consulting and Technology. ICICI was the largest finance recruiter and ITC recruited the largest chunk of students in the FMCG space. General Management, Consulting and Technology fields saw recruitments from companies like Reliance Industries Ltd., Price Waterhouse Coopers, KPMG, Microsoft, Lenovo, Samsung, Amazon, etc. XLRI reported an impressive median salary of Rs. 17 lacs per annum, which is higher than the median salary of the previous year.

217 students of Delhi Universityâ€™s Faculty of Management Studies received 236 offers with an average Cost to Company (CTC) of Rs 17.04 lacs per annum. The highest recruiters in the Consulting and General Management field were Accenture Strategy and Deloitte USI (S&O). The finance field placements were dominated by Citibank, Deutsche Bank, Goldman Sachs and HSBC. Coca Cola, Nestle, Unilever, PepsiCo and ITC were among the top recruiters in sales and marketing whereas E-Commerce recruitments came from companies like Amazon, PayTM, MakeMyTrip, etc.

2015 has been a stellar year for placements in Indian B-Schools. Great placement records show that there is a huge demand of management students in top companies of the world. Going by the records, it seems that a good management degree is one of the most certain conduits to a fruitful career.