CUCET 2021: No more only Merit Based Admissions in Central Universities | Career Launcher
CLOSE

Ministry of Education, had formed a committee, headed by the Vice-Chancellor of the Central University of Punjab, which was working on the process for conducting a Central Universities Common Entrance Test (CUCET). The committee after due deliberation and taking its own time against the one-month period expected, has finally submitted the report to the Ministry of Education, earlier this week. With the recommendations submitted by the high-level committee, it is expected that the exam shall be notified by April-end and the application process should start in May.

The first CUCET, for admissions to undergraduate courses in Central Universities, is likely to be conducted by June end. Its worth noting that CUCET is proposed to be conducted twice a year. However, for the academic year 2021, it will be conducted just once. CUCET, to be conducted online (Computer-Based Test) by National Testing Agency, will be held across multiple centres in the country.

The exam is expected to be mix of General Ability and subject knowledge tests. CUCET 2021 is expected to have two parts: Part A and Part B. While Part A will be a mix of Verbal Ability including Comprehension, Quantitative Ability, Logical and Analytical Reasoning along with General Awareness, Part B will be based on subject knowledge. What will be the structure of Part B, will be an interesting wait! With board exams already in place, does it make sense to put the candidates through another test based on the subjects and one on which students have been tested barely a month before CUCET, is a question which remains unanswered as of now.

CUCET 2021 will be a three-hour online exam with 100 questions equally divided across the two parts. The CUCET committee has recommended that students must secure at least 50% to be considered for admissions. However, clarity is expected on overall or sectional cut-offs too. Moreover, Universities will be free to decide whether they will consider overall score of just one part of the paper.

Delhi University, had earlier, as per media reports clarified that it will be accepting CUCET 2021 and Board Marks for admissions and will give equal weightage to both. Other Central Universities are accepted to take a decision soon.

Stay tuned for more updates and do visit www.careerlauncher.com/cucet for regular updates and more information about central universities. 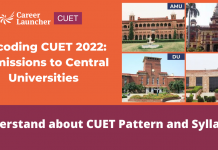 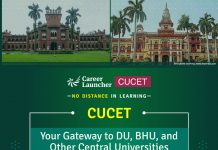 CU-CET : The Global BigDaddy of UG of the next decade