While the previous release of the list of cities was 66, CLAT has now updated a new list consisting of 40 cities only. The table below contains the list of updated CLAT exam cities- 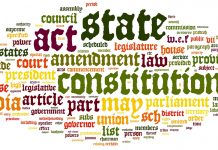