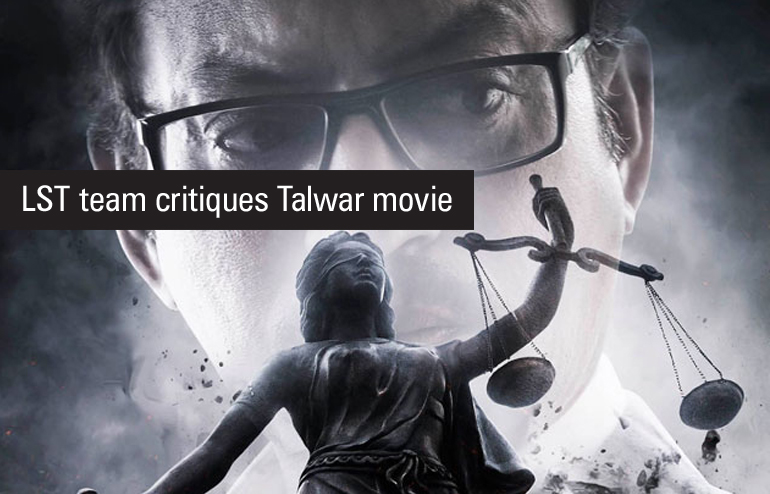 As Talwar became the most talked about movie in the legal circles we found it to be an imperative that we ask our Law School Graduate mentors about their opinion on the same. So we gave them a task to watch the movie and review it legally. Here is what they all saw from the eyes of a legal eagle.

The Movie Talwar has been one of the most talked after movies in the legal fraternity. It’s a question on the investigation system in our country, though many people have raised questions about the judicial system of the country through the movie. It is not exactly about the judicial system as the trial has not been shown in the movie. Sadly it goes missing in almost all the movies till date. They skipped the same in ‘No one killed Jessica’ which seriously was a big disappointment. Similarly here too they did not show what prompted the Judiciary to hold the parents liable in a system where you have to prove the accused liable beyond reasonable doubt to get them punished. About the movie he advises that student should see the movie to understand that how we should not hold a person liable by our conscience based upon media trials and investigations because there is always two sides to a case. He feels after viewing the movie the student can easily understand how to critically understand a given premise. Another movie he recommends which very similarly showcased an anomaly of the system but also showed the trial was Bawandar where the rape case of Bhanwari devi from Rajasthan was shown. But sadly never had a marketing budget ,hence was never a big hit. He exclaims that Gulshan Grover has done his best role as a sincere prosecutor in the movie who struggles with the system to get justice. Do watch it in your Diwali holidays.

Off the record he feels fictitiously The Movie Jazba should have been seen as a sequel to Talwar and that the parents should have avenged the death of their daughter the way it’s shown in Jazba. He adds don’t waste your time on Jazba if you are preparing for CLAT as a word of caution.

Our Legal reasoning Mentor from CL Jaipur center, Nikita Koradia who is also a Post graduate in Law from Warwick University opines Famous English jurist William Blackstone had once said “It is better that ten guilty persons escape than that one innocent suffer“. Over the years, this quote of Blackstone has become a famous principle of criminal law.

In this background, the double murder case exemplifies the biggest flaw in the criminal justice system wherein the fact that there were 4 people in the house and 2 were dead, automatically reversed the burden of proof on the other two i.e. the talwars. The flaws did not curtail the line of action of the legal system rather aggravated the case against the Talwars. Though it can be argued that the movie has tried to create and strongly influence the public perception in favour of talwars for an on going case which again points at the anomalies in the way investigations would be furthered, however the role of media when the case was unraveled also formed a public opinion strong enough to subdue the right of freedom of speech. The initial case filed against the talwars was triggered majorly by the police which was further fuelled by the media which shaped the public opinion against Talwars in an undecided case. The link of the public opinion so formed and conviction of Talwars did not come as a surprise as it was done to pacify the raged public opinion on the basis of mere circumstantial evidences without satisfying the beyond reasonable doubt principle.

However it cannot be overlooked that the movie has sympathized with the Talwars and has tried moulding the public perception yet again, this time in favour of Talwars which again raises a question on the credibility of the Indian Legal system. Before coming to any conclusion, it is essential for any lawyer to weigh the evidence and have an unbiased conclusion. Being a part of the legal system requires an objective stand by the judiciary and I think the movie has tried to influence that.

While Suhasini Senior Executive with LST at Delhi, a Post graduate from NLU Jodhpur summarises The Movie shows us the two different perspectives of the case, one showing ‘The Parents’ as the Culprit, while another says that the servants were involved.

The movie shows the flaws on the part of CBI, the Noida Police. The movie also tells us, how the media, becomes the court and pronounce the judgment, even before the matter is brought before the Court of Law. You can call it the perspective of the Director of the movie

The ignorance of facts, the approach of Noida police, the tussle between the two teams of CBI, shown as the flaws which we have in our system through the director’s eyes.

Hope, all the questions will be answered when, Allahabad Court hears the matter on appeal.