CLAT.. You Amuse Me..Bemuseme..Irritate Me... I Get Spellbound By Thee
CLOSE 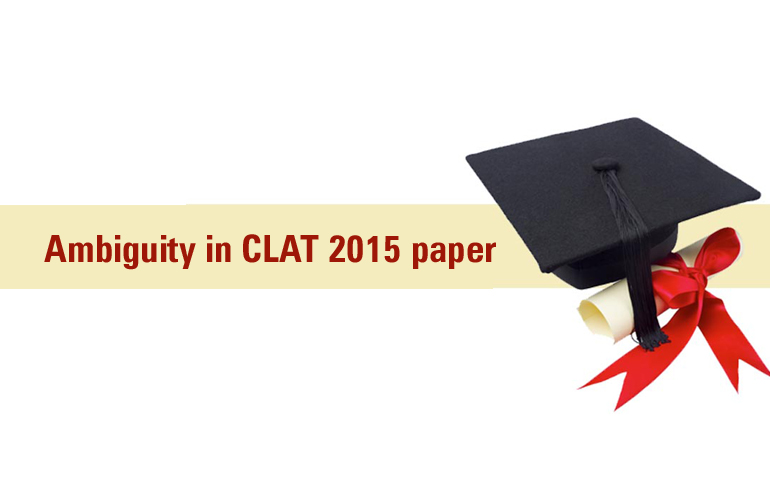 A seat in the reputed national law Schools of the country seems to be like the great Vikaramaditya’s throne. To get there the student not just have to crack the exam but also needs to go through the tribulations of waiting for the results, thinking about is this the final list, is the result correct or shall this be revised, will a writ rid us all of the selections etc. If we take a year by year account the first CLAT was the only authentic exam that went smooth without any jerks, credits to the law school rightly referred to as the Harvard of the east. But then the dynamics also were so subtle back then. This year the law school that allegedly couldn’t save the paper from getting leaked in the second CLAT was given the mighty responsibility of conducting CLAT and testing the patience of students who prepare for one year and take a drop which they think shall rank their intelligence, but each year turns out to be a ‘wagering’ on their part.

With full sympathies to the students what adds to the hullaboo is that while a minority do stake their claim rightly, there we do have a crowd who take this opportunity to take outpersonal vendetta and cry foul while they wasted their time of preparation.Amongst them no doubt remains a crowd who are truly deserving and fail to reach their objectives because of the ‘glitches’ year after year. This year I met two VCs of top tier NLU and both remarked CLAT as a failure and alleged that the qualityof students have suffered. A remark which even made me stunned was that acelebrated selection of last year (top ten) can’t even properly write legibleanswers and speak in proper English inside the law school. The VC further addedthat the erstwhile [pattern of NLSIU], before CLAT was the best when there were100 marks objective and 100 marks subjective. I strongly agree to what he saidbecause I started teaching when the pattern lived and believe me no Tom, Dickor Harry could get in to Law school just like that on the basis of mastering asubject or having been lucky in two hours. Only the best could. It wasn’t wagering like it is today. The pattern was fixed with the objective sectiontruly following the said pattern and the subjective specifically testing students calibre vis a vis comprehension, knowledge. It penalised students on word limitwhich was fixed making it a no nonsense pattern. Your Subjective part was only checked if you have scored more than 50% in objective testing.  But sadly today the exam is alot about luck and also how the glitch in the pattern/ manner of testing etc benefits you.

The law schools playing around with the student’s future who are devoted to such extent that they even drop, invest one year to preparation. It’s harsh and brutal and even if whatever be the intent of law Schools. It specifically started with the WBNUJS paper which was the toughest paper tillCLAT 2015, but had answers marked in it. It was followed with petitions and activism, but nothing just happened. Yeah few people became famous as CLATgurus, raked on popularity and scored good admissions next season. Similar was with the next few CLAT, to the extent of GNLU conducted test coming out with two rank lists, marking scheme issues. Bar code puzzle and what not. A Tiring process for students, emotional and financial issues for parents and as trainers a big question mark on our own intelligence where deserving students getting to lower ranked Law schools and some surprises each year as selections.It does pain as a teacher, but then you are happy too as students have cracked examination which you trained them for.It pains as there is a question mark as to whether we are right in testing them, training them,making them ready for an exam which like an illusion
The need of the hour is to create either a common platform of testing, or else make a regular pattern. If the laws chool is experimenting in their papers atleast keep it clear to the students prior. We live in a country where the general tendency of teaching is fulfilment of the syllabus. Syllabus means a lot when it comes to just anything academically. The students have adapted themselves to the given module right from the time they gain consciousness about academic life.

The element of surprise usually at school level brings a jolt to their preparation as they are not prepared to find anything novel to the given curriculum. Though the Boards have tried hard to replicate the west and bring in practical based teaching but even that followed a syllabus, quite amusing. The problem with CLAT has been the Law schools trying every year to contribute something significant but ending up making a joke out of it. Joke more given the audience is not who is mature to handle the kind of deviation they take. Similar changes have occurred at IBPS,even CSAT examination. Strong criticism came but what was rather a different move as opposed to CLAT was that the pattern never changed throughout the year.Yes, there were some questions always which were a new or innovative way of asking the similar questions from the past. The syllabus no doubt was subjective and not objective like what every year on a website registered asclat.ac.in claims and even gives as some sample questions. Misleading and misrepresenting what truly its intent is. The audience here again are school kids who have been trained in syllabus completion format who blindly follow the syllabus as provided.

It was funny to listen to claims by some coaching such as it was our questions which came in CLAT etc. Well then the new pattern should also had been there. But the new pattern questions appeared in CAT papers. So I guess plagiarism is also something Law schools do, not following what they preach in Intellectual Property Law lectures.

The students are but prospectivelaw students and have been taught basics of law which kind of makes them believe (as they are taught) that the system can be changed, writs can be filed, fundamentals rights are invaluable to judiciary, National Law schools are defined as State under article 12. Hence the protest every year. The handful who got through the process, post the Fourth CLAT feel themselves lucky and happy. But the lecturers and many others feel the quality of students have also gone down with the entrance each year becoming more or less a shady affair with transparency which is often questionable. More controversial is the fact that each year even students who get through notice some students entering law schools after the beginning of academic session who never figured on the rank list.

If we see this year’s CLAT , thesudden change or volte face by CLAT was not surprising rather amusing and thefeel that â€œyeah even this is possible is what came to me. Having been giventhe jolt of an online examination, rumours about options in hindietc throughout the year Iwas quite expecting some ‘contribution’ to the past 4 year running fiascocalled CLAT by RMLNLU. And they did add to the imbroglio. If we discuss the CLAT section wise. English as reportedby students had a different module, an answering pattern expected from studentswhere they were to answer using the same level of knowledge about English theywere prepared to but using different approach. Similar was logical reasoningwhere questions were changed in their style of attempt but the logics to be appliedremained the same. In legal Principle based questions were asked and studentsreacted to the questions as they should, Assertion and reasoning questionsreturned and I do personally feel they are the easiest and more scoring type ofquestions provided you have read a lot of theory from books and not just solvedquestions which are principle-fact based.. The debatable area though was casestudy, where some landmark cases were asked. This was a new thing and never givenin the notification. Legal knowledgequestions again were something that the students did not expect, but as I saidwe should have been expecting given its CLAT who are strongly giving competitionto the Delhi CM on diverting from promises made. One via notifications and theother via election manifesto.

It’s simple. Even if law school feels each year by creating such controversies they are coming out with something new, at the end of the day they are at the receiving end as they receive students who , in their words are inferior, not serious, nuisance creators, modern era freaks, drug addicts etc. While the private law schools benefit as they receive those students who are serious enough to do law and believe even if they are in any law school they can still do good as it’s a profession and requires professional expertise than branding (not always). The emergence of Jindal Global Law school and the way they are coming up as one of the best places to study is secondary to the thought that every year they are getting students despite being branded as a costly law school. I have personally visited Private Non National Law Schools like NIRMA, JLU and met students who are any day better to many Nationals and have been doing very good professionally and academically. Some National law schools who are ranked lower too are benefitted as due to the erroneous ranking every year they get some good students who inturn perform better. I met a batchmate of mine, currently who heads his own law firm even he opined at the dismal show by juniors whom they hire with high expectations and finally get dejected, while private law school graduates working at half the package showing better grasp at work and perform better.

I remember as a Law student I attended a lecture where the legend Ram Jehtmalani remarked a law school is created out of its students and what the law students do as law students during their time as law students. Here I do remember his words. That with such a process of examination to ascertain its students, it’s difficult to decipher where are we headed. There were even rumors of some top rung National law School opting out of CLAT and willing to conduct their own entrance as they feel NLU-Delhi’s emergence as a standout law school is because they get better students because of their separate entrance examination. MNLU Mumbai showing the way with conducting a very transparent examination giving the mantle to an independent authority IBPS, that came out with the most transparent results within the promised time. Where law schools stress on quality and the average fees of almost all law schools are above 1.5lacks per annum. They should deliberate on the entrance process and make it more transparent and systematic thinking prospectively or they should stop complaining about student activism and nuisance inside the campus. You are reaping what you are sowing.

All The Best!
Team CL