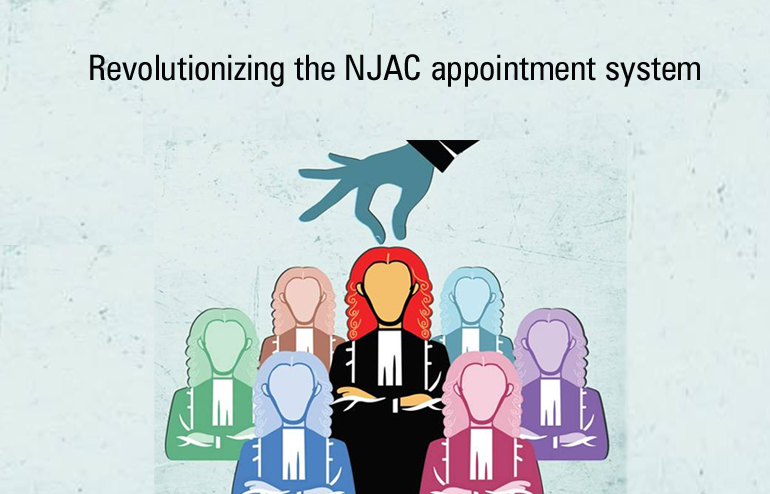 The National Judicial Appointments Commission (NJAC) is a constitutional body proposed to replace the present Collegium system of appointing judges. The NJAC was established by amending the Constitution (Ninety-Ninth Amendment) Act, 2014. Both Bills were ratified by 16 of the State legislatures and the President gave his assent on December 31, 2014. The NJAC Act and the Constitutional Amendment Act came into force from April 13, 2015.

Who will be in the NJAC?

NJAC comprise of six dignitaries ; Chief Justice of India, two most senior judges of the SC, the Law Minister, and two Eminent Persons. Eminent Persons are nominated for a three-year term by a committee consisting of the (Chief Justice, the Prime Minister, and the Leader of the Opposition in the Lok Sabha), and are not eligible for re-nomination. It is different from the earlier collegium system which comprised the Chief Justice of India and Forum of four senior-most judges of the Supreme Court

NJAC has been the most debated move by the Central Government.

Amicus reviews NJAC with Legal Faculties of LST pan India. This year we do expect CLAT to have some questions from the same. So it is important for the law aspirant to know the in and out of this system. I will now present a few opinions and try to answer a few questions.

Ashish Singh , LST Anchor , UP East Region takes a balanced view NJAC and after researching from the political angle gives a very detailed analysis. He quotes ‘In a discussion in the Rajya Sabha on the Liberhan Commission report, former law minister and then leader of the Opposition, Arun Jaitley, expressed his view that there are two types of judges – one who knows law and second who knows the law minister’. This opinion strengthens the allegation that the influence of the executive in the appointment of judges cannot be ruled out unless a judicial commission is formed. On the same occasion, Jaitley also said the clamour for post-retirement jobs is also adversely affecting the impartiality of judges of the higher judiciary. The NJAC act was passed unanimously on the demand of noted jurists and learned personalities in order to make the process of judicial appointment transparent and for dealing with corruption in an effective way. Surprisingly, the five-judge bench not only struck down the act but also brought back the collegium system that has so many discrepancies. It is necessary to make a brief list of different enactments for the appointment of judges.

He further adds ‘It was with the objective of improving the existing system that the previous government embarked upon a series of reforms during the second half of its tenure. Three bills were prepared focussing on different aspects of the judiciary.’ The completion of this endeavour was left to the good offices of BJP once it came to power. However, with the SC striking down the constitutional amendment that would have established the NJAC, we have taken a significant step back. While the SC’s order is respected, it is now time to introspect and determine what could have been done for a different outcome. We can analyse it in three respects

First, the approach adopted by the BJP government and those in charge of navigating the law was not one of conciliation and compromise, but of confrontation. Perhaps emboldened by the strength of their numbers in the Lok Sabha, the government did not feel the need to build a broader consensus, hoping that legislative majority alone could be an answer to unilateral decision-making. In theory it could have been. In practice, it cannot. It was also not entirely graceful to wash dirty laundry in public. There was, in retrospect, no need to name and shame judges. Diplomacy is an essential part of manoeuvring any law but it becomes doubly so when you have to convince a skeptical judiciary that it’s in their best interests.

Second, the BJP’s amendments, though few, made substantial changes which had an impact on the way the law came to be viewed by the apex court. They systematically altered the carefully crafted balance that had been achieved with the draft prepared by the previous government. Veto powers were given to the two members, meaning that it would become possible to game the system if the two decided to collude (the judgment draws attention to the potential for abuse). Hard-coding the constitution of the committee into the amendment instead of leaving it open to easy amendment could also have been examined in greater detail. Many voices have spoken out about better defining the criteria for the posts of eminent personalities. Greater engagement with the judiciary over the last year-and-a-half could have helped address these concerns.

Third, the BJP government chose to disregard the other pillars of reform and chose almost exclusively to focus on the law regarding judicial appointments. The other two bills, which related to judges inquiry and judicial accountability, were allowed to languish. These were important parts of a nuanced answer to a complex problem. The bill on judicial accountability particularly would have ensured greater transparency in decision-making by holding judges accountable to a statutory standard. The inquiry bill, on the other hand, provided a forum governed by the higher judiciary itself while establishing a transparent institutional mechanism for speedy redressal of complaints against judicial misconduct

Deepu Krishna, our Law program head supports the NJAC by asserting that, around the world the selection of Judicial officers have always evolved through various improvements of processes and the stress always has been to keep the faith of people on Judiciary alive. He is supportive of the contention of many senior advocates and jurist in the country that post collegium the Nation has not witnessed one inspiring Chief Justice of India. He even felt it personally during his period of litigation that this country was robbed off its chance to have its first woman chief justice of India in form of Justice Ruma Pal who was denied the coveted seat because of her alleged less allegiance to the â€œcollegiumâ€. Legally Deepu Krishna feels NJAC should have been at least made operational for some time to factually realise all the apprehensions about infringement of independence of Judiciary. This could have been true or false, but unless proven by practice it was premature on part of Judiciary to contend that this was Legislative breach of separation of power. But this prompt response of Judiciary does raise suspicion. The Separation of power stresses specifically that legislative and administrative power vests with Legislature and Judicial power vests with Judiciary. The constitution of NJAC on the face of it does not interfere anywhere with the judicial functions of the Judiciary. If put to practice we would have surely seen, experienced the flaws and then questioned it like the Judicial review powers under 9th schedule.

While Judiciary and Legislature are fighting it out the attorney General of India has recently remarked that the Government shall come up with a New act and the Judiciary has reinstated the Collegium, To summarise we shall pull up Ashish Singhâ’s closing remarks ‘For a year-and-a- half, legislative success has eluded the government. Its attempts at legislation have been seen as anti-farmer (land acquisition), incomplete (GST) and now unconstitutional. For a party that claims a historic mandate, the BJP government must start asking itself the hard questions’ what is the common theme in all of these lost opportunities at reform?. The answer lies with the future power struggle between these two constitutional power heads.